This cost too much

Our city is doing sewer separation to keep the storm run-off from filling the sewer pipes and overwhelming the water treatment plant in the event of a large storm. The main sewer line runs down the center of our street so we were told to expect the mess and disruption of the street getting torn up.
In a good cause, of course, because naturally none of us wants the sewer to back up and cause problems for homeowners and potentially Lake Erie as well. All homes built after 1971 were required to separate waste water and storm water. Nearly no houses in our pocket neighborhood were built after 1971. Until recently, many homes had a ditch out front that the gutters and other rainwater drained to.  So, progress. Good for Lake Erie. Good for the community. 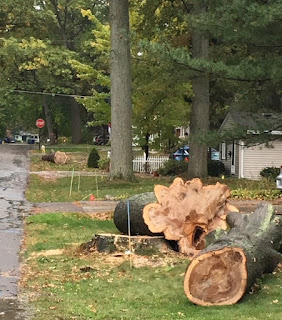 Unfortunately, our city chose to contract the job to the cheapest contractor who then subcontracted some work to an even cheaper outfit. As a result, the city -because that is who is ultimately responsible here, no matter what the city engineer suggests- is complicit in the destruction of no fewer than five trees over the age of 20 and at least two that were about 200.
Our neighbors' 200-year-old oak, older than the city itself, had withstood centuries of "progress" only to be deemed in the way by the lazy contractor and eliminated.
This tree had survived the founding of the village, the building of the little vacation beach houses all around it, the piping of sewers, water and gas lines. Electricity came in and worked around it. The houses it shaded were built respecting its presence, The street was paved, first with gravel, then with blacktop and the tree was undisturbed. 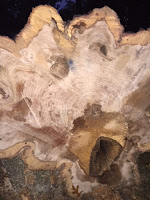 But somehow, the lazy corner-cutting shits that are replacing the sewer under that very road had to have that venerable 150 foot tall, 200-year-old oak which was perfectly healthy, cut down. That irreplaceable tree now lays in pieces at the side of the road, a testament to the expediency at the cost of long-term value.

Interestingly, there is a board of municipal utilities in my city. And they are elected. I wonder if that idiot city engineer is elected too... .